What I’m Reading Hard Stop: The Centers for Disease Control and Prevention is using its quarantine authority to temporarily halt evictions in order to keep COVID-19 from spreading.  The order is effective immediately and will run through the end of the year. People earning under $99,000 a year or couples earning less than $198,000 a year are eligible.  The sound that you now hear is landlord attorneys furiously typing challenges to this order, which is an unprecedented use of executive authority and will almost definitely be contested.  Bisnow Ripple Effect: Remote work is having a devastating impact on the large service industry ecosystem that relies on office employment and ranges from coffee to airlines.  Marker Penny Pinching: With people going out less and consuming less, coins aren’t making their way through the economy.  This is creating major headaches for everything from laundromats to fast food restaurants as change becomes increasingly hard to come by.  Washington Post Shifting: Large cities like New York and San Francisco have been in the headlines lately for falling apartment rents, pushing national averages down.  However, secondary markets like Lexington, Knoxville, Phoenix, Nashville and Minneapolis are still quite strong and seeing rent increases over the past year. Globe Street Grim Milestone: US debt is poised to exceed GDP next year, a first since World War II. Wall Street Journal Chart of the Day Employment at small businesses has stalled out 20% below pre-COVID levels. 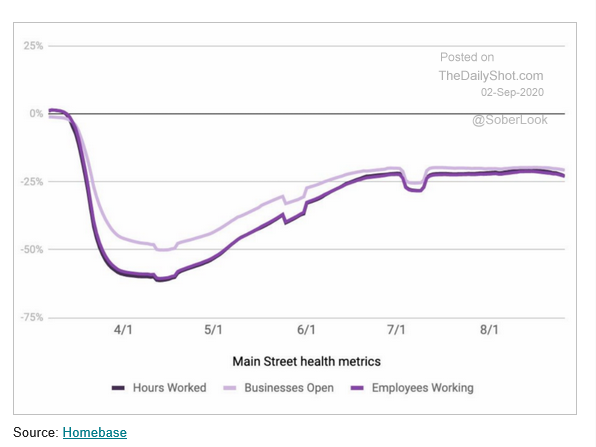 Source: @homebase_data WTF Kinky: Canada’s chief medical officer is now recommending that people wear masks when having sex. Reuters Fun Police Win Again: A Kentucky family judge accused of boozing on the job and having threesomes at the courthouse has been kicked off the bench.  And, here I thought that this was America.  Fox News Basis Points – A candid look at the economy, real estate, and other things sometimes related. Visit us at RanchHarbor.com