Most years April 1st presents little more than an opportunity to play dumb pranks on your family and co-workers with near impunity (side note: I’ll continue to at least attempt to do this).  However, 2020’s edition of April Fools Day comes with a question rather than a prank: Just how large are the defaults going to be?  Today is the first day that rent, mortgage payments, lease payments and a host of other financial obligations with come due since the COVID-19 outbreak grounded the economy.  From Bloomberg(emphasis mine):

From landlords to economists to Wall Street traders, a lot of folks are fretting over what’s going to happen on April 1.

That question is hanging over the U.S. real estate industry as $81 billion in rent payments come due. Renters are warning they won’t pay, prompting property owners to have delicate conversations with their lenders. And regulators are racing to keep the wheels of finance turning in the middle of a global health crisis.

Few in the industry are certain how things will play out. Most agree that laid-off renters and shuttered retailers are suffering, and that the pain is going to spread as long as the economy is locked down.

After a long economic boom in which tight housing inventory gave apartment landlords unprecedented power to raise rents, the shoe is on the other foot as the calendar turns toward April. Many local governments have placed temporary bans on evictions, and there’s a growing sense that even tenants who can afford to pay will skip rent.

That last sentence is what is terrifying for the economy as a whole.  Many  segments have been hit hard in recent weeks and those people and businesses are unlikely to be able to afford to pay their rent or mortgages.  However, a substantially larger number are still employed and drawing a regular paycheck while working from home.  Wikipedia defines Game Theory as follows:

Game theory is the study of mathematical models of strategic interaction among rational decision-makers.[1] It has applications in all fields of social science, as well as in logic, systems science and computer science. Originally, it addressed zero-sum games, in which each participant’s gains or losses are exactly balanced by those of the other participants. Today, game theory applies to a wide range of behavioral relations, and is now an umbrella term for the science of logical decision making in humans, animals, and computers.

IMO, this is the perfect lens in which to view the next few days.  At issue is that the best thing for the economy is for those people and businesses who can afford to pay their bills to continue to pay, while those who can’t don’t and are (hopefully) helped by the social safety net enacted by the CARES Act.  However, what is best for an individual business or resident – at least in the short term – is to not pay since they will likely fall through the cracks and many recent policies have provided relative impunity for making this decision.  The irony is that if everyone acts in their own best interest in the short term, it will likely cause much more damage to the financial system, making all of us worse off in the long run by throwing the economy into a deeper recession.

Here is what people are saying, the question now is will actual payments look similar:

We are about to witness one of the largest financial applications of Game Theory in history.  Buckle up.  This is going to be a fascinating week and no one has a clue how it will play out.

Whipsaw: Goldman Sachs has dropped their economic projections again and is now forecasting a 15% jobless rate as GDP crashes 34% in the 2nd quarter, followed by the fastest recovery in history.  I wish that I could agree with the second part of that sentence.  I really do.  However, I think that it greatly discounts uncertainty going forward and therefor tend to fall more in line with Bill McBride at Calculated Risk who had this to say about an economic bounce-back:

My current guess is the economy will start growing – slowly – in June (maybe July).   But growth will likely be slow at first as people put their toes in the water.  I don’t expect a “V” shaped recovery unless there is an effective treatment or a vaccine, then growth will pickup quicker.

Upside Down: Conventional wisdom is that it becomes cheaper for real estate owners to borrow when interest rates fall.  However, the opposite has been true over the past few weeks as some lenders take shelter on the sidelines and others raise spreads dramatically until they see some real price discovery in the market.

Write Off: The CARES Act provided a massive relief for real estate owners through net operating loss carrybacks by accelerating allowed deprecation and enhancing the ability to use it immediately.

Hindsight is 20/20: I’m going to go out on a limb here and assume that private equity investors are regretting their big investments in the restaurant industry.

Bleeding Out: Airbnb is hemorrhaging cash as it tries to appease both hosts and customers.

Mr Fix It: Restructuring advisors and law firms are gearing up for an onslaught of new opportunities.

Good news: wait times at TSA checkpoints are down. 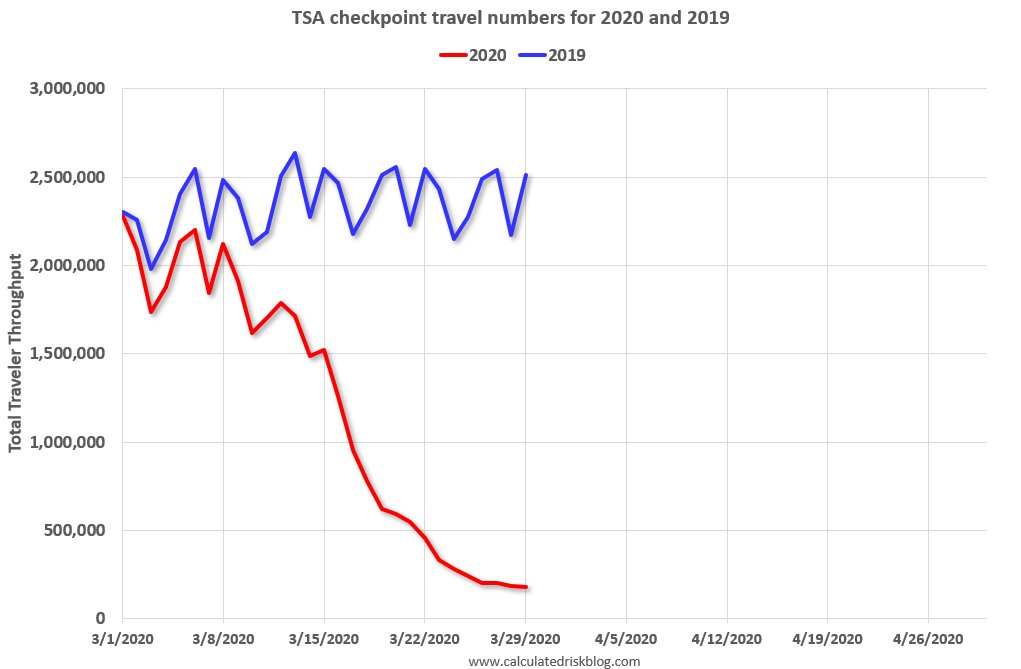 No New Tricks: A man “teaching his dog how to drive” was arrested after a high speed chase.  I, for one am relieved to see that idiots and crackpots are still doing idiot and crackpot things in these difficult times.

Silver Lining: One of the few good things to come out of the past month is the Instagram account @LibertyTheQuarantineDog which features a talking, frequently swearing black Labrador who his clearly annoyed with her people being home all of the time.