When the pandemic shutdowns began, most economic observers focused on the sudden collapse of demand that drove portions of the economy into a deep freeze.  Now, as the economy continues to reopen and demand comes back, supply chains are as well, mostly keeping inflationary pressures in check.  In most parts of the modern economy the supply of goods can recover relatively quickly once demand rebounds.  Yes, it takes time to restart shut-down factories, but it typically happens in weeks, not months.

One segment of the economy that has not experienced a flat pricing dynamic is housing, which is experiencing price inflation.  The reason is that, while demand collapsed initially, supply dried up as well.   Builders scaled back their future development plans substantially and sellers of existing homes took listings off of the market.

What’s different about housing than most of the rest of the economy is that it takes months, not weeks for supply to come back on line.  First off, existing home owners are less likely to move during a pandemic due to health risks, meaning less existing supply.  Second, it takes a long time to construct new homes and builders who got religion about not overshooting demand after the last crash have largely maintained their discipline this cycle. After the COVID scare, builders have been cautious about acquiring new projects.  Even when they do push down on the gas pedal again, it doesn’t happen quickly. Between obtaining approvals, horizontal development, vertical construction and marketing, it can take 12 months or more to get to the first unit sale on a subdivision project.

This is a perfect example of why the housing market can be challenging to predict.  If the pandemic had happened in a 2008-like environment with an oversupplied market, prices would have crashed as buyers vanished, leaving a lot of overhead supply to be reabsorbed.  In the incredibly under-supplied market that we had in the beginning of the pandemic, the opposite happened.  Demand crashed quickly but rebounded relatively quickly as well.  Supply plunged too but is much slower to recover, which, coupled with low mortgage rates is forcing prices higher.  It seems absurd that a dramatic plunge in demand would eventually lead to higher prices, but that is indeed what is happening.

My big takeaway from this is that the condition of the housing market when a negative event takes place may be more important than the actual event itself.

Backing Up the Truck: The Federal Reserve is now going to start buying individual corporate bonds in the primary market in addition to ETFs.

Stalemate: While buyer pricing expectations have fallen, that’s not enough to actually move commercial real estate prices in a downward direction.  It requires a catalyst that actually induces the seller to sell at a lower price.

Can’t Quit You: Companies are finding that the notion of reducing exposure to China is far easier said than done, especially during a time of global economic weakness.

Out of Balance: The pandemic has accelerated the trend towards online retail substantially and pushed companies to grow expand inventory in order to provide a margin of error for the supply chain.  This has resulted in a massive demand spike for an already-under-supplied warehouse market that could take years to meet.

Worst Case: Moody’s has released their downside scenario for the multi-family market and, although it shows weakness, it still doesn’t hit the depths of the last downturn (h/t Steve Sims):

In the “Protracted Slump” scenario, according to the “Q1 2020: Apartment First Glance” report, Moody’s forecast model assumes the second quarter GDP will contract by more than 30% (annualized), and the economy will continue slide until late 2021. Under this scenario, multifamily vacancies are expected to rise to 7.3% by the end of the year, spiking to as high as 7.7% by the end of 2021. Meanwhile, asking and effective rents would decline by a total of 5.5% and 6.3% through the end of next year.

I came across these charts on Monday and am still trying to wrap my head around them.  Domino’s and Alphabet went public within a couple of weeks of each other in 2004.  Alphabet (Google) changed the world and the way that businesses and individuals interact online.  There is very little that happens on the internet that they do not touch.  Domino’s reliably delivers consistently mediocre pizza. And yet…. 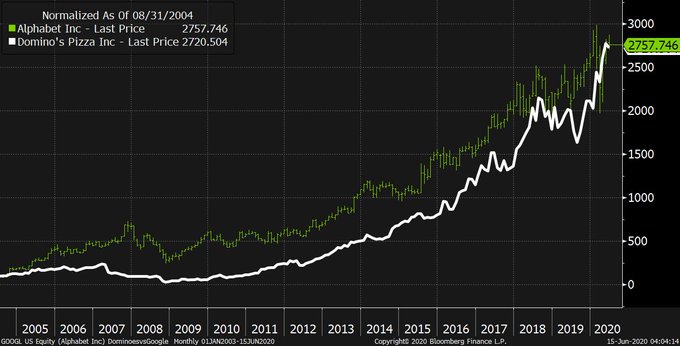 This one shows what happened with re-investment of Domino’s dividends. 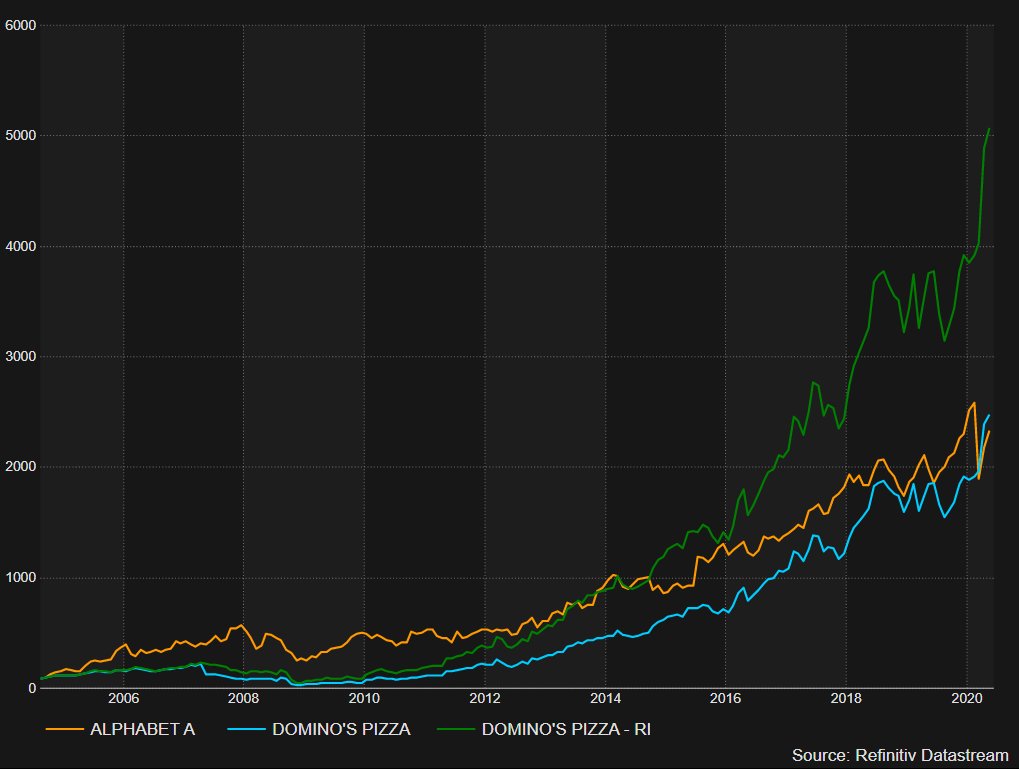 Tipping Point: As if airline travel wasn’t already horrible enough, Delta and American are now banning alcohol on planes in response to COVID-19.  This reminds me of college football stadiums banning the sale of alcohol during games.  Far from encouraging sobriety, it led to more tailgate binge drinking and students getting plastered before even entering the stadium.  The big winner here will be airport bars which are about to see a major uptick in demand.

Covidiot of the Day: An Indian man who claimed to perform ‘covid exorcisms’ by kissing people’s hands, has died from a coronavirus infection, allegedly infecting at least 20 others along the way.