MIND THE GAP
A land development investment specialist looks at an uneven housing recovery.
The Washington Post posted a fascinating series recently with interactive maps last week about the tremendously uneven recovery in the US housing market. The first story focused on the nation as a whole and the others drilled down on the Bay Area and Atlanta. They are posting similar articles on DC and Charlotte later this week. The underlying theme of these stories is that more affluent sub-markets have experienced a strong recovery from the housing bust while less-affluent secondary markets that often saw the most new home construction activity in prior cycles are still languishing. Many primary markets have blasted past their prior peak in terms of pricing while secondary (and tertiary markets) are still well below, contributing greatly to a widening wealth divide:

“The findings of The Post’s analysis underscore another way in which the economy, despite its improvements over the past several years, continues to deliver better returns for some Americans than others.

In good times, housing converts income into wealth. It turns a paycheck into the next generation’s inheritance. But in neighborhoods that haven’t weathered the past decade as well, homes have become a source of debt, a physical trap and an obstacle to life’s other goals.”

The Bay Area story focused on the divergent fortunes of San Francisco which has boomed like no other market in the US post housing bust and Stockton which was ground zero for the housing crash and foreclosure crisis in the Central Valley and has failed to recover. The difference between the two markets which are separated by only 80 miles of freeway could hardly be more striking:

“You get there (Stockton) on Interstate 580, through 80 miles of suburbs and farmland, up into the bald hills of the Diablo Range that are suitable for neither. The highway, eight lanes wide, cuts through at the Altamont Pass, 1,009 feet above sea level. And then the hills part and California’s Central Valley comes into view: an unexpectedly flat landscape that feels very far from San Francisco, and where Stockton and its neighbors are still suffering the lingering effects of the worst housing bust in the nation.

The low ridge line is a physical barrier between unequal fortunes, between record housing riches in the Bay Area and an epidemic of lost wealth in the Central Valley. Home values have doubled in some San Francisco and Silicon Valley Zip codes in little more than a decade. But in the hardest-hit Stockton Zip codes, homes over this same time have lost 20 percent of their value.”

Believe it or not, it hasn’t always been this way. Decades ago, average incomes in Stockton and SF were somewhat comparable and the gap between housing costs was far smaller. Beginning in the 1990s, incomes and population grew and the Bay Area’s housing supply simply didn’t keep pace, resulting in very expensive housing prices and pushing people who wanted to own a home out to the Central Valley and leading to the phrase: “drive until you qualify.”

“During the boom years, the moving trucks brought over the Altamont Pass families that were priced out of increasingly expensive communities around the Bay. Hardly anyone moved in the other direction.

They brought demand for entire new subdivisions and communities built on former asparagus farms and almond orchards. And entranced by all the money the government reaped in development fees when those subdivisions were built, Stockton built a beautiful new arena downtown, next to a new minor-league ballpark, right by the site of a planned new marina on the inland channel that leads back out to the coast.

At the time, the rapidly rising home values seemed to say something about Stockton itself — that this was a place that was coming up, that was finally poised to share in the Bay Area’s prosperity.”

However, all was not well behind the scenes and incomes were mostly stagnant in the Central Valley during the housing bubble, all of which led to serious dislocations that the area was ill-equipped to deal with once the speculative value of it’s housing stock collapsed:

“In San Francisco and Silicon Valley, incomes were rising during the bubble years. And the growing demand to live in the Bay Area was outstripping the supply of homes, pushing up prices. But the longtime agricultural economy in the Central Valley wasn’t taking off. Incomes weren’t rising as home prices were. And there wasn’t a shortage of housing.

In the run-up to the bust, though, very different communities started behaving similarly — not just out here, but across the country, says Nobel Prize-winning economist Robert Shiller, who is credited with having predicted the housing crash when few others believed a bubble existed.

“I think that the people in the Central Valley view themselves as a different kind of Californian,” he says. These are practical agricultural people, not tech entrepreneurs; they live in spread-out ranch homes, not ornate Victorians. But in the housing frenzy, the idea of that difference broke down. Whatever was happening in the market on the coast seemed relevant to what should happen here in the great big Northern California economy.”

We know that this ended extremely badly as the Central Valley got overbuilt and oversupplied, cities took on too much debt and Stockton became the poster child for the foreclosure crisis in the US once home prices collapsed under their own weight when the mortgage market imploded. The Bay Area’s housing market, on the other had held up relatively well through the bust years and then rebounded strongly on an epic run fueled by a resurgent tech industry fueled by a tidal wave of venture capital investment and lack of new housing supply due to restrictive zoning and politically powerful NIMBYs. Only this time around the recovery failed to move inland as prices increased in the Bay Area.

This phenomenon is not limited to the Bay Area and the Central Valley. We’ve seen it up and down the state of California over the past several years where coastal markets have boomed and inland markets have stagnated.

I decided to look at things from a bit different angle and take a look at relative pricing between markets. With help from our friends at Market InSite Real Estate Advisors as well as Steve Reilly who covers the Bay Area for Land Advisors Organization, we put together an analysis of home prices in coastal production housing markets vs. inland production markets to show how previously strong pricing relationships have broken down badly during the bust and subsequent (coastal) recovery. 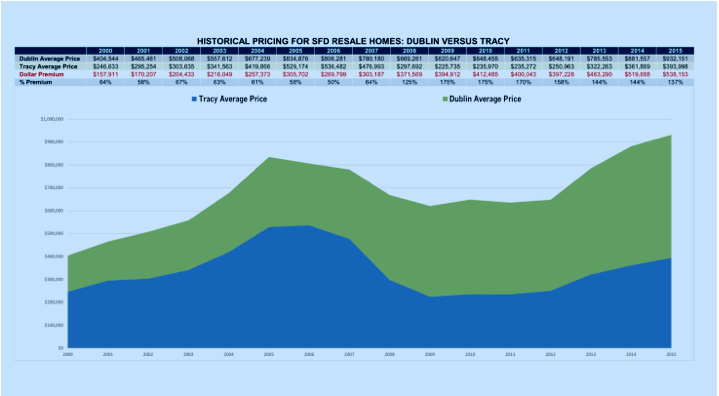 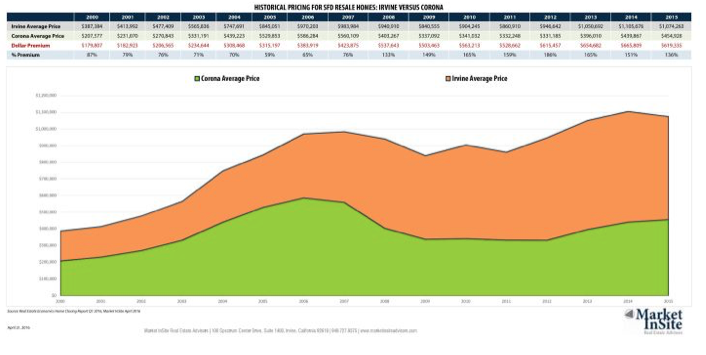 As you’ll notice above, we used resale data rather than new home. We did this because it’s a much more robust data set (there are a lot more resales than new home sales) and also because the product mix changes more gradually over time whereas the new home product mix can vary greatly as new neighborhoods come online and more mature ones sell out. It also allows us to look at price independently from other local issues like rising impact fees which could cause changes in the type of product that a builder needs to construct in order to turn a profit. However, this data is mostly applicable to the new home market as well, only the prices tend to be higher for new units. Unfortunately, our data only goes back 15 years.

What’s striking about both of the above charts is just how much prices in the primary markets has moved away from the secondary markets in the wake of the housing bust. Before 2008, Dublin achieved a fairly consistent premium of between 50% – 75% over Tracy. Once we hit 2008 and the foreclosure crisis mounted, that premium rose to 175% and has since settled in the high-130%s to mid-140%s over the past few years. Dublin is now nearly $100k above its prior peak pricing while Tracy is over $142k below its peak. Almost the same thing happened in the Irvine vs. Corona chart where Irvine was historically 60% – 90% more expensive than Corona before 2008. At that point, the pricing relationship broke down, widening out to 186% in 2012 before tightening back to 136% today. Irvine has exceeded its prior peak by $90k while Corona is $131k below its peak.

In the past, prices this high near the coast would lead to a building boom in the secondary markets as workers look for more affordable options, leading to housing starts, new jobs and rising wages in those markets. In other words a virtuous economic cycle. That hasn’t happened this time around though as the primary markets have continued to outperform. While primary markets often get a lot of attention, the real increase in housing starts usually comes from the secondary or production markets. Why? Because land costs are far lower allowing builders to construct housing that a larger subset of the population can afford. In other words, if the secondary markets remain weak, it’s very difficult for home builders to achieve substantial volume when it comes to starts and sales.

The issues that led us to this point are both numerous and complicated: a bias against starter homes by young households who saw their parents or friends get stuck underwater in secondary markets during the bust, Millennials starting families later mixed with a demographic boom in the 20-25 year old age range, a lack of job growth in secondary markets, a lack of move-up home inventory, tepid job growth, a growing preference for the mobility of renting over the stability of owning, workers seeking to avoid commutes, etc. However, there are essentially four possible outcomes when it comes to the primary vs. secondary gap:

We are well aware of the anecdote that “when Orange County catches a cold, the Inland Empire gets the flu.” I’m sure there is a similar saying up north. Several investors have voiced this concern recently citing seemingly overheated primary markets as a reason to avoid investing in the secondary markets. IMHO, the flaw in that logic is that the secondary markets never actually recovered from “the flu” this time around. They didn’t follow the primary markets up and they could represent a good relative value play if primary market prices and rents stay elevated. The coming demographic expansion in the 30-39 age group that will last until roughly 2030 could provide a tailwind in secondary markets as well. 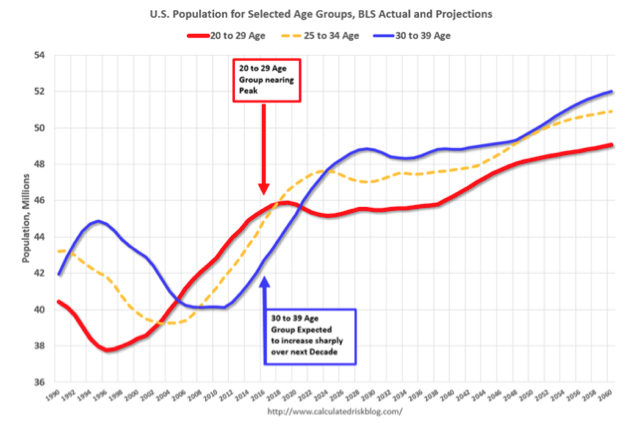 Since co-founding Land Advisors Capital of California, the predecessor to Landmark Capital Advisors in 2011, Adam Deermount, along with Steve Sims led a team that originated nearly $500 million in equity and debt commitments for projects in the Western US. Prior to Land Advisors Capital of California, Adam served as a full-time consultant on high-profile restructuring and workout projects. Mr. Deermount was an advisor to State Street Bank on the restructuring of a $550 million land and development loan. Prior to that, he served as a bankruptcy consultant to Hogan-Webb, LLC, the Chief Restructuring Officers of LandSource Holding Company, a $2.6 billion land development company owned by Lennar Homes, LNR Partners, and CalPERS.